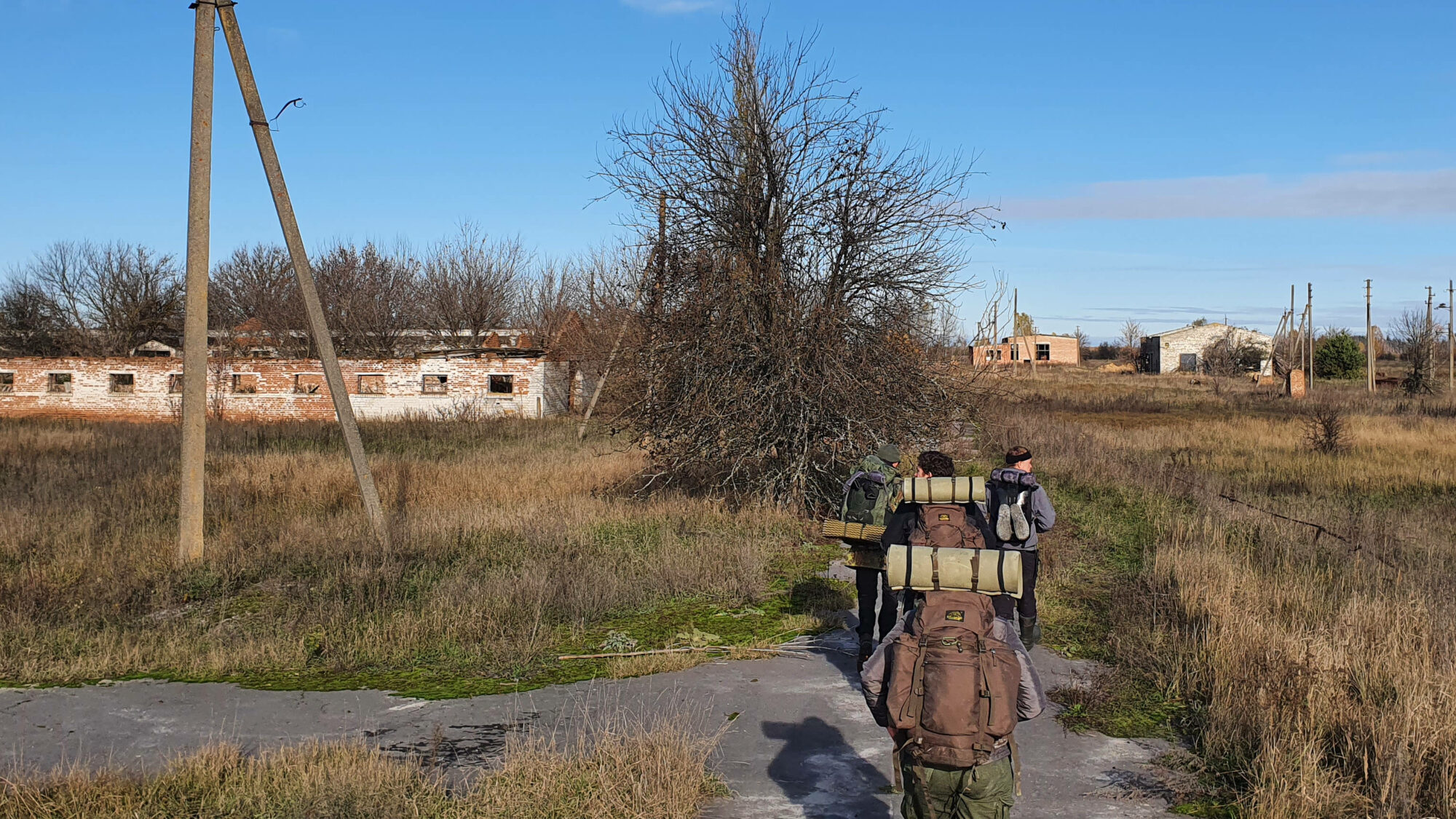 After a restful sleep, we were supposed to hike the rest of the way to Pripyat. We were greeted by sun rays shining through various gaps in the roof, promising mild weather and wonderful views (and pictures) of the zone during daytime. Motivated by this, we packed up, left the attic and headed to an old cowshed for breakfast.

Breakfast of the winners

Our guide rolled out the picnic blanket, and set up the gas cooker for tea and coffee. We unpacked the breakfast part of the Ukrainian military MRE (meal, ready to eat). I think it was buckwheat with nuts and fruits. Of course served ice cold right out of the pack, because I was too hungry to wait until it was warmed. Additionally I had some hard cookies (“Panzerplatten”). And it was the best breakfast I could have dreamed of in this situation.

Of course we did not leave any waste behind, but took everything with us. This applies for any waste we produced during the whole trip. We would dump it later in Pripyat in a dumpster set up for legal tourists. I was glad to see, that everyone in the group lived the UrbEx credo: “Take nothing but picture, leave nothing but footprints.”

Before the trip our guide briefed us on the dangers of the zone. Apart from buildings prone to collapse, hotspots of radiation, holes in the ground, etc. animals are a factor. Wild boars with piglets can be dangerous, while we statistically should not fear bears or wolves. The latter will smell us from kilometres and avoid us. But – he told us – the most dangerous animals here are the Przewalski’s horses. Those rare and endangered by extinction animals were set free in 1998 and have reproduced since then. Although those horses are shy escape animals and are not used to humans, they have no natural enemies in the zone and are pretty bold. But there are only a few dozen of them, so we will most likely not be “lucky” to see them. But we did! And it was awesome to see roughly 17 of those majestic animals on the horizon.

When Bjarke just said, it would be nice to see them from a shorter distance, one of them left the herd and started to gallop towards us. Only roughly 40 m away from us, the stallion stopped, stomped its hooves and snorted.

guide, with a slight amount of fear and excitement in his voice

On our retreat the stallion crowd controlled us by running around us in half circles, clearly trying to (successfully) push us away from his herd. It was obvious he was doing this to give his mares the opportunity to flee as they started to move away. Nonetheless we made noise and shouted to keep the horse at distance, because we didn’t want it to loose its natural fright of humans or unknown things in general. If they get used to humans, they might become even more bold and possibly endanger other humans – or get too close to poachers.

But I have to say, that Russian (and Ukrainian) swearing sounds pretty poetic (unfortunately it cannot be easily translated in all it’s colorfulness):

It was not very impressed by clapping, beating with sticks on metal containers and swearing, though. In the end we talked ourselves into believing that we scared him away with a Bluetooth speaker and Metallica music. But I’m pretty sure, its job of controlling us was just successfully done.

After a while, we continued our journey, crossed the fields and took a short rest (and a dump) between some conifers – deep inside the 10 km zone.

With dry feet and some snacks (and coffee!) in our stomach, we moved on to our first sightseeing target, the Buryakivka vehicle graveyard. While the majority of the vehicles has already been buried, there are still very interesting ones left: Those include some (fire) trucks, buses, Soviet moon rovers and the German “Joker” police robot. Unfortunately the area is heavily guarded by cameras and guards with dogs. So we could only take a peek through the grass onto the site. What a pity. I was really looking forward the “Joker” which was featured prominently in the HBO series. But of course I also didn’t want the trip to be over that early.

We put on our backpacks again and moved out following some power lines. We had to be really quiet because we came very close to the Vector radioactive waste storage complex, which is heavily guarded. Luckily for us the dogs onsite very busy barking at something else, so we could pass by under the radar. Since it was already dark and we didn’t want to stay there longer than needed, we have no pictures of decent quality.

After a while, our guide recommended us another short break to eat sweats and drink a good portion of water. This was, because we were about to cut the edge of the radioactive red forest. And we should not take a break in there. This was the part of the journey I was a little bit afraid of. It was especially this part I took some FFP2 masks with me. If it would have been windy in there I would have put on one of those, because I really didn’t want to get Caesium-137 particles into my lung. Luckily for us, there was absolutely not the faintest breeze. The radiation levels actually only spiked up to ~8 µS/h – not great, not terrible.

Although the efforts of the past 2 days already manifested in leg and foot pain, we marched on quickly and concentrated, looking back every few seconds. Although it was unlikely a car would use this unpaved path, we still didn’t want to risk being seen.

I will not say anything about the final route taken into Pripyat or any landmarks on the way.

We managed to keep a good pace of roughly 4 km/h on this last part of the hike. A good chunk of this stage was in the darkest night, and we could not even use red light anymore, because we were already pretty close to the reactor and Pripyat. Here I noticed that my brain was playing tricks, because it nearly got any visual stimuli anymore. I remember, that I was following Koko as the last member of the group. The blister on her foot was already pretty hurting and we didn’t want her to fall behind. At least I thought so. I was totally sure to “see” her backpack in front of me several times, when I heard her whispering next to me. So it was better to orientate myself listening to the sound of the footsteps of the others.

Soon after that we began to see the schemes of the first buildings against the sky. Now it was not far anymore. We managed to traverse our way through Pripyat totally like Ninjas – unseen and undetected by anyone or anything. But we heard a metallic noise in the night. Our guide was sure that this noise was caused by a scrapper dismantling something rather close to us. Those scrappers are omnipresent in the zone. Although they are usually not directly dangerous to stalkers, they are afraid of police and guards and have to lose a lot. So we were especially careful and silent.

Preparing the stalker flat and diner

After we reached the stalker flat, we put dark foil on the windows, the others collected the waste of prior stalkers. Then 2 of us dumped all the brought and collected waste in a tourist dumpster and got the care pack with water, food and beer out of the stash, where it was hidden for us. We then had diner together.

The last thing we did this evening, was to take the bottles of beer and got up on the roof. There we enjoyed the calmness of the night and the beautiful view on the Chernobyl power plant that was visible on the horizon. Unfortunately there were clouds, so I could – again – not take pictures of the stars. But I got this 30 second exposure of the reactor.

If you missed it, read the last article with the first part of the hike through the zone. Be sure not to miss the next part of this series, where we will explore Pripyat.

One day in Pripyat – Urban Exploration